The Magic of Trevor Duffy 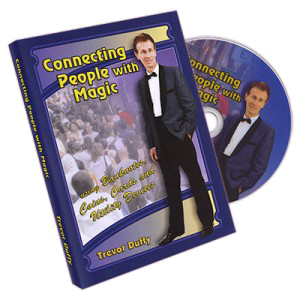 Trevor Duffy is an award winning magician who has traveled extensively, entertaining with his own blend of magic and comedy. He innovates a great deal of his own magic and this DVD contains a collection of some of his favorites. He also lectures around the world, sharing his magic, valuable ideas and experiences.

This is a dynamic, heart warming opener, which establishes rapport and credibility for you, at the start of the show.

Here is an outstanding torn and restored banknote effect, with the serial number recorded.

Signed card to both pockets

This is a double barrel effect, that will blow the audience away! their signed card ends up in both pockets, one at a time, with a flowing comical interaction.

A clever twist of the mind, where a signed card is found, before it is actually signed.

Close up coin magic where the use of sound and motion creates a clever magical transposition. Gets the
audience every time!

Don’t just take your cards out – Magically produce them! Trevor impresses on this, sharing his reasoning
and unique method.

This is an impromptu trick, to celebrate a spectator’s birthday. Trevor shares how this evolved and how this routine became a favorite at Trader’s restaurant in Johannesburg, drawing people back time and time again.

This trick utterly blows the audience away. A spectator shuffles and secretly views a card. A moment later,
the deck is spread, to find the thought of card is now reversed!

An extension of the classic 6 card repeat. With the use of thin cards, more and more cards appear in the end…a fistful of 14 cards! This is a great opener for a platform show.

This is a true story of how we as magicians can touch people’s lives – sometimes people who are going through the saddest or most trying times in their lives, will alow you to come close and brighten their day. I share this sad but heart-warming story.